Get my FREE Writing Guide!

Would you like a list of all of the lessons that your students will need this year during writing? This free guide is packed with specific lesson ides for narrative, opinion and informational writing.

Get my FREE Writing Guide! Would you like a list of all of the lessons that your students will need this year during writing? This free guide is packed with specific lesson ideas for narrative, opinion and informational writing.

If you are looking for a way to get students engaged in their lessons and include student families in the classroom- a Super Bowl classroom party is the answer!
Last year, I threw a Super Bowl party in my classroom. The parents and my students could not stop raving about it, so I wanted to share with you. I am not a sports fan. Most people find that hard to believe when they see my sports themed classroom. 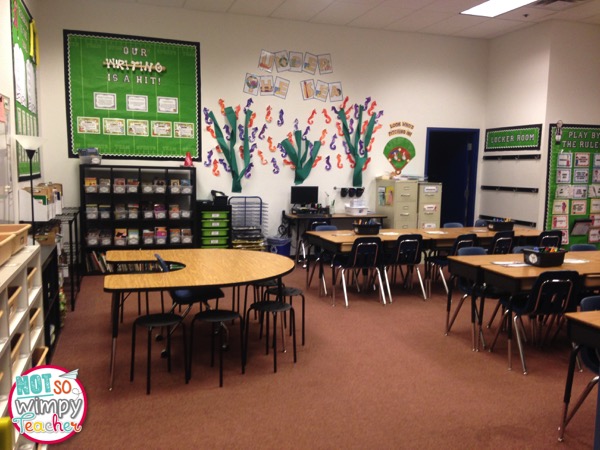 I don’t love sports, but my students do. After the holidays, the whole country seems to get football crazy. I knew that I wanted to take advantage of my students’ excitement for the big game. I also knew that state testing was right around the corner and I could not afford to waste any class time. So I found a way to throw a fun (and simple) party and keep it academic.
Guests
I am blessed to have several moms who volunteer in the classroom from time to time. I also noticed that the majority of my field trip chaperones are moms. I wanted to get more dads in the classroom. So I made the decision to invite dads, grandpas or uncles. In order to make it possible for more of these special men to join us, I scheduled the party for the very first thing on a Friday morning. Lots of dads were able to come on their way to work.
Surprise!
I decided to keep the entire party a secret from my students! I was able to pull off this surprise by sending the invite home via email. I used Sign Up Genius to invite family members. It was so easy for them to reply without students knowing. To really shock the kids, I had the dads drop the kids off as usual for school. Then the dads parked and came to the classroom while the kids were on the playground. When I brought the kids into the classroom, they were blown away to see the decor, food and many dads and grandpas! Isn’t the ref shirt a fun a touch?! You can grab one just like it HERE!
Food
You can’t have a Super Bowl party without the traditional finger foods. I decided to be a bit crazy and have a nacho bar and chips and dip- even though the party was first thing in the morning! I am glad that I did, because everyone loved the food! The football donuts and other sweets just topped it all off! I put the items that we would need on the Sign Up Genius invite and the dads actually brought in all of the dishes! Academics
Not every Super Bowl party includes academics, but our class party did! The great part is that the kids are having so much fun, that they barely notice that the are doing work. Plus, dads can see what their child is working on in class.
I kept this very simple! I went through my papers and grabbed any math worksheets that we never used. I added in some fun football reading passages. I stuck each activity in a basket with any materials that students would need (such as pencils, crayons, dice, etc). I also put a container of football party trinkets in each basket. Many of the activities did not even have a football theme! I just used stuff that I had on hand! But these FREE football math prompts were a fun activity. Students rotated around the room completing activities in the baskets. Students who did not have a guest, just went around with a friend from class. They were happy about that! After they completed an activity, dads would check them and students would be allowed to pick a party favor as a reward. Students loved getting rewards for finishing the activities! It was a simple way to make an academic focused party lots of fun. More Fun
After our time was up for completing the academic centers, I played some sports music while everyone enjoyed the yummy food. We also enjoyed a fun game of football charades. As the dads left, they thanked me profusely! It was one of the best mornings in our classroom and I knew that the time had been well spent! You may also enjoy these posts Ring in the New Year in the Classroom Winter Olympics Activities for the Classroom More than 400 helpful resources available in my shop! Not So Wimpy Writing Masterclass

Do you struggle to find time to teach writing? Do you find it a challenge to deliver lessons that help all of your writers? Would you like to learn a simple and effective way to teach writing? The Not So Wimpy Writing Masterclass is an online professional development course for grades 2-5. In this course, you will go from feeling overwhelmed to feeling confident and excited about teaching writing. Check out these recent podcast episodes:

Grab a snack and join the discussion over on Facebook!

We have four separate groups for grades 2-5

Get even more great tips and tricks on my YouTube channel!

We LOVE and recommend these products!

Check out the books, supplies, and other products that we use in our own classrooms. We only recommend those things that we absolutely love and swear by! Learn More About Me